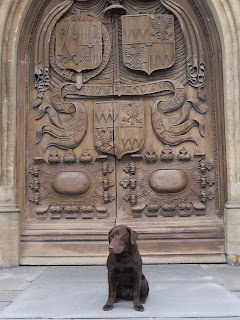 Bert’s Blog:  Ah, I’ve learn something about the large white container – it‘s called a bath.  Confusing as we spent a few days at a place called Bath and there was not a bit of soap in sight.  This Bath brought many new experiences including ‘camping’ which entailed the Boss & Mrs sleeping in their own box and me sleeping in my own pop-up kennel next door which attracted many admiring glances, sadly not from other dogs.  On leaving I watched with interest for my pop-up to pop-down but alas it proved impossible and is still popped-up we speak.  I think they need lessons.
Bath turned out to be a place crammed with buildings, thick with people and lots of weird smells. Boss explained this was a Town and no sniffing or misbehaving allowed.  To get there I experienced riding in a very tall box with circular legs, stairs, tickets and many directionally confused occupants who kept getting on and off – they had obviously lost the scent.
While padding round Bath I waited outside a very large building called The Abbey (see photo) while viewing went on inside.  I am learning the new word ‘stay’ which confusingly sounds like ‘play’ but means the opposite and involves me sitting still in one place while the Boss walks away, then I get up and follow him.  I am not sure this is correct as we have to repeat it so many times that I get bored, lay down and just ignore him, at which point he praises me.  Will I ever understand Boss talk?

Back at home I have been introduced to another small version of the Boss.  I envy this one as he is allowed to sleep peacefully in his bed, experience much petting and gets fed when he makes a loud noise ….. I wish.