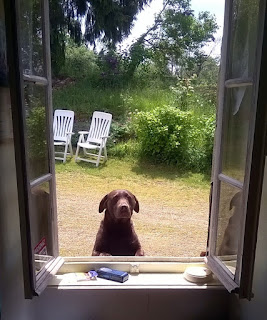 You know that feeling of boredom that comes over you when you have to wait for any length of time – well it overcame me at lunchtime recently.  So much so that I had to come and look in through the window to see if they had finished lunch yet as I was getting peckish, wanted to play and was fed up sitting around doing nothing.  There was an alternative motive as well – French sticks – not the sort made from trees, but the sort made from bread – all crispy on the outside and gorgeously tasty on the inside.  They make such a satisfying crunchy noise when you bite down on them and are conveniently sized to just fit into my mouth without too many gaps round the edge.  I do know from experience that once the Boss and Mrs have finished their lunch, not only do they emerge from indoors to play again but they usually come bearing the remains of the French stick they had for lunch and I am given it as a treat.
Recently I accompanied the Boss and Mrs to a shop where they sell nothing but French sticks – I couldn’t believe my eyes (or my nose)  The smell was droolingly lovely and after buying several to take home the Boss inadvertently put them into my travelling compartment for the homeward journey.  I believe in share and share alike – do you?  Anyway there were far too many for just the Boss and Mrs to eat so I helped them out by chomping half of one before we reached home…. Big mistake!  The Boss got it in the ear from the Mrs for incorrectly placing them near me and I got it in the ear from the Boss for checking the flavour had not changed.


Maybe I should just ‘stick’ to the tree sticks in future and leave the French ones alone!
Posted by Bert at 13:02