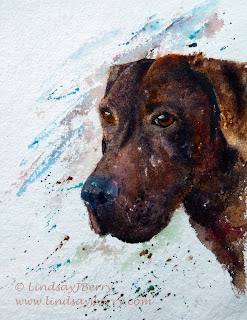 At last…..I managed to catch the attention of the Mrs!  I have spent many, many years and opportunities, bamboozling, cajoling, charming, coaxing, tempting and manoeuvring to persuade the Mrs that I would be a good subject for her artwork.  With my handsome good looks, my naturally elegant wiggly body and extremely waggy tail I thought I would be the dogs b…….  well, you know what I mean - the best model ever!  My agility however always went against me as I was told I never sat still for long enough and was always on the move.  I complained and whined about all the photos of me she could use but none were quite right apparently.
I have sat on her feet, barked my boredom, stood in her way, stolen her paint brushes and drank her painting water, even, at great peril to my own safety, inserted myself into the view she was painting but never had I managed to instigate the inspiration she needed to paint my portrait until now!
I think she was having a bit of a guilt trip as she had been asked to paint the portrait of someone else’s pet dog and, once it was completed, could see I was a little put out!  When I say “put out” I don’t mean put outdoors as that is my favourite place to be, but “put out” as in the Mrs thought my nose was “put out of joint” which of course was ridiculous as that is my best feature, is as straight as a die and packed full of 300 million olfactory receptors which is 29,999,600 more than hers.  Anyway the outcome was that she eventually, after all this time and all my shenanigans decided it was my time to “sit” for a portrait aided by the “right” photograph …. and here it is….don’t I look a handsome beast?