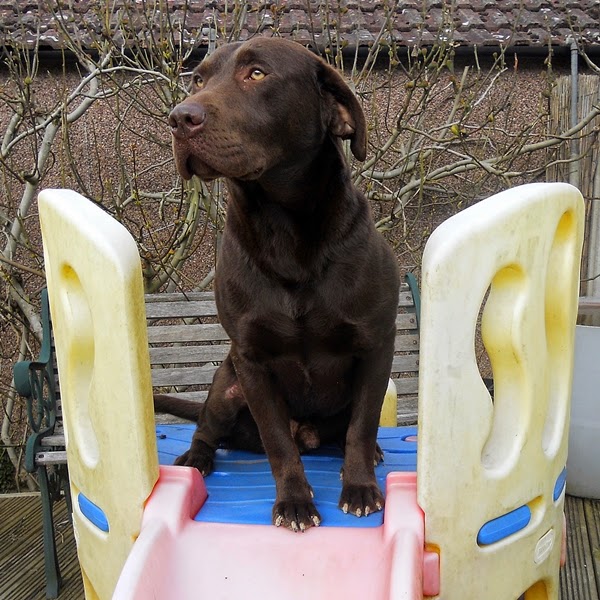 Dogs at play!   I manage to entertain the miniature versions of the Boss and Mrs by encouraging them to play with my favourite ball.  They are reduced to serious giggles when I catch their throws after the ball has hardly left their hands and I thrill them with my acrobatics when I jump up to retrieve it from high above their heads.  Despite three of them being slightly older than me I have noted their ability to catch a ball is seriously lacking in expertise and I therefore have to drop it at their feet to ensure the game continues.  Having noted their deplorable catching skills, the tables are reversed when it comes to walking on two legs instead of four as I have to say, they have learnt that skill far faster than I, who has still not conquered it, and as for propelling themselves forward on gadgets with circular legs that go round and round called bite-cycles, they can remain seriously un-bitten and out-manoeuvre me every time.


We also play on the slide but when it is my turn everyone seemed reluctant to be at the bottom with loving outstretched hands to catch me like they did with the miniatures!  Their reluctance may have stemmed from memories of the way I launched myself from the top with only my back feet barely skimming the slide or they may have remembered the last time the Boss tried to catch me mid-flight only to be flattened by my missile like impersonation.  He seemed rather perturbed when I covered his face with kisses to say thank you for cushioning my landing.  Either way no one seemed interested in my version of Doggie the Eagle and I was left at the top of the slide looking like a right lemon!
Posted by Bert at 23:35