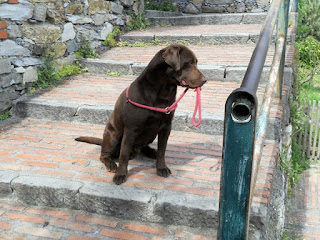 I prefer holding my own lead as I know exactly where I am going, problems only arise when my destination differs from the Boss’s.  To be fair this does not happen often as I follow him faithfully most of the time.  Occasionally a delicious smell will assault my nostrils and I just have to follow it, blind to all apart from a sharp reprimand in a voice I recognise as Annoyed Boss, or even worse – Annoyed Mrs.  The only other time I get side tracked is when I see a playmate – I do so love to play, but not everyone has the same sense of fun as me.  The small furry spitty thing here definitely does not have the fun gene in her make up.  I have only to walk up and give her a nuzzle before she is bonking me on the nose with her paw and saying something unrepeatable on these pages.  I followed a delicious smell up some steps on holiday and charged on ahead to find out who it was, only to find the miscreant had left days before and there was no chance of a playful romp, just a tantalising scent left behind.  The steps led from the train, on which I had to pay for my seat although it turned out to be on the floor under the seat, up to a village called Corniglia, I didn’t count them all as I ran out of paws but there had to be more than 1000 and I swear my legs were a few inches shorter afterwards.  I was having a breather here waiting for the Boss and the Mrs, who after the first 500 were in no mood to talk to me let alone reprimand me for going on ahead!  Phew!