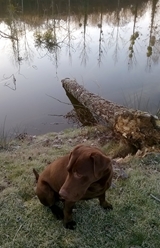 BERTS BLOG:   I know what you think - after my last blog post regarding my habit of marking my territory and leaving messages - however, I was not the culprit of knocking this tree over.  Although I may have inadvertently directed my three legged dance at this message post I had nothing at all to do with the fact that it fell into the lake. Despite the Mrs trying to make me feel bad and to curb my natural instincts while wearing my lead (which I am quite capable of carrying myself without the Mrs attached to the other end) I knew by the lack of scent that any message on this particular tree was not left by me!  In fact it was left by France’s version of storm Doris which we found had happened about three weeks before we arrived and what I class as my personal swimming sanctuary had eight trees blown down around it, two of which had fallen into the water and this was one of them.  Needless to say I was ecstatic never had I seen so many sticks laying around.  I was spoiled for choice and proceeded to run around collecting as many as I could to give to the Boss and Mrs who both promptly put them in a huge pile.  Was this some new hobby which I knew nothing about?  Disaster - they burnt all my new sticks.  Without a fur coat like me I assume they had to keep warm somehow but what a waste, especially as later in the week my new mate Frederique and his tractor arrived and pulled the fallen trees from the water, turned them into logs with his chainsaw and the pile grew so large that the Boss and the Mrs will never have to worry about keeping warm again and in future will hopefully leave my sticks ALONE!!
Posted by Bert at 23:45