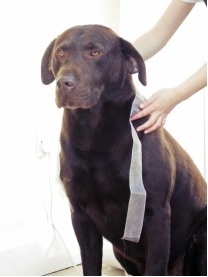 This is my stoic look. I had to put up with decoration by ribbons. The miniatures came round and wanted to make me look beautiful. I tried to avoid them because I am already beautiful enough without the additions of frippery but the Mrs intervened and made me sit still for a bit so they could have their way. I ask you, what is a dog to do? Obey the Mrs and end up looking ridiculous or disobey the Mrs and end up in the dog house with the Boss? It lasted for about 15 minutes by which time I looked like a haberdashers shop and the miniatures became bored with that game and went on to something else, thank goodness. After I had divested myself of all the ribbons and bows I went and found my lead and gave that to them to see if they would put that on me instead which in turn would nudge them into taking me for a walk – that magic word which conjures up new smells and vistas to investigate.

After about the tenth time of offering the lead they eventually got the idea and it was put round me. The ensuing hilarity when I insist on carrying the other end myself was tempered with the Mrs insisting that each one of them had to take a turn in holding the other end as well, so I relinquished it into the hands of these inexperienced miniatures in the hope I would not be strangled. After four versions of being pulled, dragged and pushed (and that was just the miniatures as I walked very sedately, but they needed some assistance!) they eventually gave up and handed the end of my lead over to the Mrs who does not need any assistance as she can walk quite well, we managed to herd them all back to their respective homes and I could return to mine in relative peace. Goodness knows how sheep dogs manage their flock – four miniatures were tricky enough!