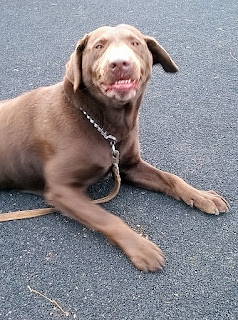 Bonjour………  The Mrs is trying to teach me French again!  This is me attempting to say “saucisses” which apparently is “sausages” in french. The Boss said there used to be a dog on the TV that said “sausages” so I should be able to say it in french seeing as how much time I spend over there.  This seems to be a bit much coming from the Boss who’s knowledge of the language only seems to amount to ‘vin rouge’ before he turns to the Mrs to ask ‘what did he say?’.  I am having a bit of trouble  getting my tongue, which is very long you know, around some of the twisters in this language!  I think I will stick to the age old method of communication where I bark very loudly and just hope they understand!   Trouble is every time I try this out the Mrs gets very perturbed and insists I be quiet and listen very carefully, for she will only say this once, tais-toi, which apparently means I should close my mouth, sit down and not bark another word!
It is unusual for me to voice my thoughts, most of the time I am very quiet and make my requirements known by snuffles, whines, the occasional snort and a variety of facial expressions which the Boss and the Mrs now know and immediately act upon, either opening the door for me, giving me dinner and patting my head for reassurance when I am unsure of something.  The Boss has adopted a few of my mannerisms, some which work for him regarding door opening and dinner but the head patting thing seems to work in reverse - only happening when he says the wrong thing - something I never do!!