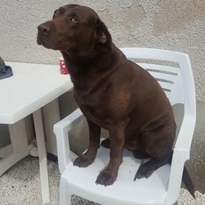 It is morning coffee time and I am sitting here waiting for mine…..  Needless to say the Mrs was a bit put out that I was in her chair especially as the Boss was having a spirited conversation with me about the benefits of ball games and whether I liked golf over football or tennis over cricket to which my reply would have been give me a tennis ball any time of the day and I would be happy at which point the Mrs became quite jealous of me being the recipient of so many words coming out of the Bosses mouth as apposed to the usual monosyllabic replies her attempts at conversation usually brought forth…..
I now recognise the word “ball” and can usually find one somewhere in the flowerbeds or on the lawn or failing that I have been known to retrieve any reasonably sized object in place of a ball if I can’t find one.  I regularly donate sticks of firewood, stones, fallen apples, slippers, socks, newspapers and sometimes articles of clothing to the collection of ball replacements all in the hope they will attract someone to amuse me by letting me show off my retrieving capabilities.


While we were having our coffee break our neighbour arrived with what I thought would be some new playmates but sadly I am only allowed to watch them through the fence with no retrieving and no playing.  Confusingly they are called ewes but they are nothing like me although they do have four legs.  Their have white fluffy coats, a bit of an odour problem and spend most of their time eating grass, baaaa-ing a lot and the little ones frolic and jump all over the place for no apparent reason.    I did try to strike up a conversation with them to inquire about frolicking but after a while their responses became somewhat boringly monotonous so now I just ignore them and have gone back to conversing with the Boss about ball games just to annoy the Mrs…..
Posted by Bert at 01:33